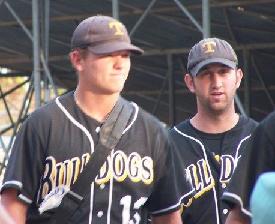 Most people are looking for someone to lead them, whether it’s your baseball team, your non-profit organization or your co-workers.

Sure it comes natural for some, but being a leader isn’t easy. And just because you’re barking orders, the team captain or the boss doesn’t necessarily mean you’re a leader.

The best leaders lead by example. As a result they earn two important things: trust and respect.

The coach that tells the team to run 3 miles, and then heads up the lead pack. The middle manager who comes early, stays late, and does a lot more than delegate. The Race for Relief volunteer who refuses to take no for an answer until they meet their goals. These are leaders, they’ve earned the right to be part of the team.

When I was a freshman in college one of the seniors routinely barked out orders. “FRESHMAN! Get the rakes and get your asses in gear so we can get out of here and go to dinner.”

At some point you stop responding to that.

Another senior comes up to me. He has two rakes. He puts his arm over my shoulder, the rake in front of me. “You know what would be great Stephens? If you raked the other half of this baseline for me so we can hit the showers and get to the cafeteria before it closes.”

He never had to ask again. He didn’t pack his bag and spit seeds watching my precision with the rake. He was right alongside me.

Being a good leader is more than just a title. You also have to be a part of the team.