Steven Pressfield’s The War of Art is universally lauded as the go to book to help people defeat what he calls “The Resistance” and how to overcome it to produce and share high quality creative work.

The ever-respected Seth Godin says, “Steve Pressfield has written the most important book I’ve ever read on creativity and why it doesn’t happen. The resistance is the most profound force in the life of the artist, the writer and the leader, and Steve has given it a name and called it out.”

I’ve struggled recently with procrastination, disguised as perfectionism, and thought this book might be the kick in the pants I need to start creating more often again.

I really enjoyed the first book, The Resistance, which outlines what it is and how it manifests when we’re trying to create.

The second book, Combating Resistance, compares professionals to amateurs and reminds us to show up, do the work, and not to get distracted.

Lastly, the third book, Beyond Resistance, goes a bit off the rails for my tastes.

The book has wonderful reviews on both Amazon and Goodreads, and it’s a short, quick read, so if you’re struggling with The Resistance, it might bright up your alley. 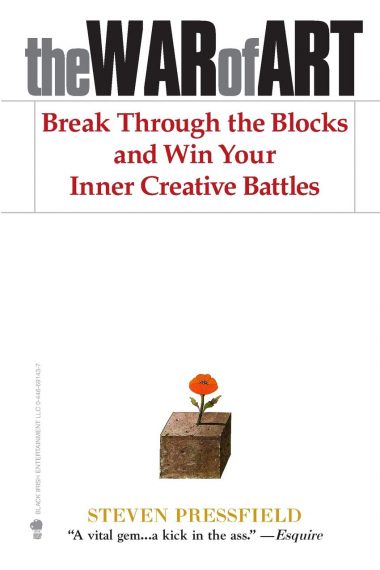 Most of us have two lives. The life we live, and the unlived life within us. Between the two stands Resistance.

Resistance is the most toxic force on the planet. It is the root of more unhappiness than poverty, disease, and erectile dysfunction.

Activities that most commonly elicit Resistance: Any act that rejects immediate gratification in favor of long-term growth, health, or integrity. Or, expressed another way, any act that derives from our higher nature instead of our lower. Any of these will elicit Resistance.

Resistance will tell you anything to keep you from doing your work. It will perjure, fabricate, falsify; seduce, bully, cajole. Resistance is protean. It will assume any form, if that’s what it takes to deceive you. It will reason with you like a lawyer or jam a nine-millimeter in your face like a stickup man. Resistance has no conscience. It will pledge anything to get a deal, then double-cross you as soon as your back is turned. If you take Resistance at its word, you deserve everything you get. Resistance is always lying and always full of shit.

Rule of thumb: The more important a call or action is to our soul’s evolution, the more Resistance we will feel toward pursuing it.

The warrior and the artist live by the same code of necessity, which dictates that the battle must be fought anew every day.

Resistance is Fueled by Fear

Resistance has no strength of its own. Every ounce of juice it possesses comes from us. We feed it with power by our fear of it. Master that fear and we conquer Resistance.

Resistance is Most Powerful at the Finish Line

The danger is greatest when the finish line is in sight. At this point, Resistance knows we’re about to beat it. It hits the panic button. It marshals one last assault and slams us with everything it’s got.

The most pernicious aspect of procrastination is that it can become a habit. We don’t just put off our lives today; we put them off till our deathbed.

The truly free individual is free only to the extent of his own self-mastery. While those who will not govern themselves are condemned to find masters to govern over them.

Resistance and Self Doubt

The counterfeit innovator is wildly self-confident. The real one is scared to death.

The more scared we are of a work or calling, the more sure we can be that we have to do it.

Resistance is experienced as fear; the degree of fear equates to the strength of Resistance. Therefore the more fear we feel about a specific enterprise, the more certain we can be that that enterprise is important to us and to the growth of our soul. That’s why we feel so much Resistance. If it meant nothing to us, there’d be no Resistance.

The professional tackles the project that will make him stretch. He takes on the assignment that will bear him into uncharted waters, compel him to explore unconscious parts of himself.

So if you’re paralyzed with fear, it’s a good sign. It shows you what you have to do.

Resistance and Being a Star

Grandiose fantasies are a symptom of Resistance. They’re the sign of an amateur. The professional has learned that success, like happiness, comes as a by-product of work.

The professional concentrates on the work and allows rewards to come or not come, whatever they like.

For the Love of the Game

A Professional Acts in the Face of Fear

The amateur believes he must first overcome his fear; then he can do his work. The professional knows that fear can never be overcome.

He knows that once he gets out into the action, his fear will recede and he’ll be okay.

A Professional is Prepared

He is prepared, each day, to confront his own self-sabotage.

His goal is not victory (success will come by itself when it wants to) but to handle himself, his insides, as sturdily and steadily as he can.

A Professional Does Not Hesitate to Ask For Help

Tiger Woods is the greatest golfer in the world. Yet he has a teacher; he works with Butch Harmon.

It would never occur to him, as it would to an amateur, that he knows everything, or can figure everything out on his own. On the contrary, he seeks out the most knowledgeable teacher and listens with both ears.

A Professional Does Not Take Failure (Or Success) Personally

When people say an artist has a thick skin, what they mean is not that the person is dense or numb, but that he has seated his professional consciousness in a place other than his personal ego.

The professional cannot take rejection personally because to do so reinforces Resistance. Editors are not the enemy; critics are not the enemy. Resistance is the enemy. The battle is inside our own heads. We cannot let external criticism, even if it’s true, fortify our internal foe. That foe is strong enough already.

He reminds himself it’s better to be in the arena, getting stomped by the bull, than to be up in the stands or out in the parking lot.

A Professional Self Validates

An amateur lets the negative opinion of others unman him. He takes external criticism to heart, allowing it to trump his own belief in himself and his work. Resistance loves this.

The professional learns to recognize envy-driven criticism and to take it for what it is: the supreme compliment. The critic hates most that which he would have done himself if he had had the guts.

Making yourself a corporation (or just thinking of yourself in that way) reinforces the idea of professionalism because it separates the artist-doing-the-work from the will-and consciousness-running-the-show.

[Note: Shane Parrish, at Farnam Street, has a wonderful short post on The Difference Between Amateurs and Professionals that is a great compliment to this chapter.]

Why have I stressed professionalism so heavily in the preceding chapters? Because the most important thing about art is to work. Nothing else matters except sitting down every day and trying.

When we sit down day after day and keep grinding, something mysterious starts to happen. A process is set into motion by which, inevitably and infallibly, heaven comes to our aid.

Resistance feeds on fear. We experience Resistance as fear. But fear of what?

These are serious fears. But they’re not the real fear. Not the Master Fear, the Mother of all Fears that’s so close to us that even when we verbalize it we don’t believe it.

Fear That We Will Succeed.

That we can access the powers we secretly know we possess.

That we can become the person we sense in our hearts we truly are.

The Artist and the Hierarchy

In the hierarchy, the artist looks up and looks down. The one place he can’t look is that place he must: within.

The artist cannot look to others to validate his efforts or his calling. If you don’t believe me, ask Van Gogh, who produced masterpiece after masterpiece and never found a buyer in his whole life.

The artist must operate territorially. He must do his work for its own sake.

The Difference Between Territory and Hierarchy

Of any activity you do, ask yourself: If I were the last person on earth, would I still do it?

If you’re all alone on the planet, a hierarchical orientation makes no sense. There’s no one to impress. So, if you’d still pursue that activity, congratulations. You’re doing it territorially.

If Arnold Schwarzenegger were the last man on earth, he’d still go the gym. Stevie Wonder would still pound the piano. The sustenance they get comes from the act itself, not from the impression it makes on others.

Portrait of the Artist

The enemy of the artist is the small-time Ego, which begets Resistance, which is the dragon that guards the gold. That’s why an artist must be a warrior and, like all warriors, artists over time acquire modesty and humility. They know they are not the source of the creations they bring into being. They only facilitate and carry—willing and skilled instruments of the gods and goddesses they serve.

Creative work is not a selfish act or a bid for attention on the part of the actor. It’s a gift to the world and every being in it. Don’t cheat us of your contribution. Give us what you’ve got.

Buy the Book: The War of Art