L.N. “Sonny” Sikes is one of the pioneers of the National College Rodeo Association. He is one of the most renown collegiate rodeo coaches (Sam Houston State University) to ever grace the sport. He has taught and mentored countless students throughout his career. Additionally, he is a phenomenal husband, father, grandfather, and friend.

Sonny in his saddle room w/ one of the MANY saddles he’s won! 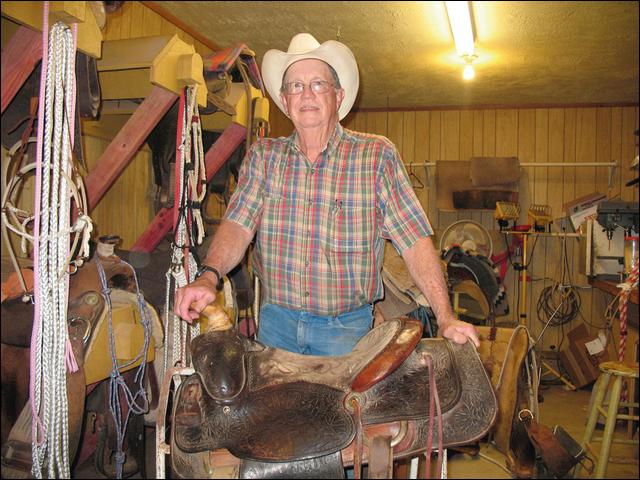 What Accomplishment He’s Most Proud Of …

“I get emotional thinking about it. I guess the most rewarding part has been watching so many cowgirls and cowboys grow up, from coming in as freshman until they graduated. In that time most learned to listen.”

Prior to teaching grade school for one year in Mexia, Texas and becoming the SHSU rodeo coach, Sonny served 6 months in the Korean War conflict.

One of his fondest memories was buying packs of cigarettes before they went ‘out to war’ in spite of the fact that he didn’t smoke. He just liked how much money he could get for a single cigarette from guys that did.

“If you hire me I’ll bring enough students to pay my salary.”

The quote above is what Sonny told Dr. Lowman, the President of SHSU at the time, when he decided teaching public school wasn’t really for him, and that he wanted to ensure that the rodeo program at Sam Houston kept going. Sonny came to SHSU in 1959.

How Has College Rodeo Changed?

Sonny notes that college athletes are spoiled today in that most of them drive fancy vehicles and have air-conditioned aluminum trailers (it should be acknowledged that my grandfather still pulls a tiny one horse trailer that’s well over 20 years old that he’s affectionately named “Whoa.”)

He also talks about how cowboys (and girls) are bigger and faster these days.

Finally, he mentions that many of the more talented cowboys have been to rodeo schools, and those didn’t really exist in his day.

It Wasn’t Always So Easy…

“Like most college students back then, I was afoot at college. We had classes on Saturday’s, but I’d hitchhike home to Mexia on Friday nights, and see Joanne, who was home from North Texas College. Then I would drive my mother’s 1952 Plymouth back to Huntsville. After classes on Saturday I would spend the rest of the weekend at rodeos. Every Sunday night I would bring my horse back to Huntsville, then take the car back to Mexia, and hitchike back to school.”

After their freshman year Sonny and Joanne married, and she joined him in Huntsville. They got their own transportation and weekends were a bit less hectic.

My Dad The Cowboy

A Poem by Sonny’s Son

He’s a Cowboy by heart, a Professor by choice,
Full of wisdom he always shared with a soft voice.

Raised on the back of a horse, with a rope in his hand,
A living he loved, hitting rodeos all across the land.

Quiet and soft spoken, not one to say much,
But he always loved to talk horses, a fast run and such

Rodeo’d his way through school to get an education,
The money was scarce and the travel no vacation.

But he loved every minute, because he’s a Cowboy by heart,
You’ll never hear him complain, it’s what gave him his start.

A Professor and Coach for 40 some odd years,
When he looks back on it all, his eyes fill with tears.

Tears of joy that is, says he wouldn’t change a thing,
Now he’s retired from his profession, but still Rodeoing.

A Cowboy can’t retire, it runs too deep in their blood,
For the life of a Cowboy is not simply understood.

Rodeo is a sport for only the tough,
The money is small and the sport is real rough.

So the Professor made the money for his kids and his wife,
But Rodeo will always be the passion of his life!

Sonny Sikes as Told By Grandson

It is dusk. The cool breeze of the night is beginning to settle in now as the sun begins to set behind the backdrop of pine trees on the other side of the roping arena. The arena’s massive lights have already been turned on. Though, it won’t be dark for another thirty minutes. Swarms of locusts and other bugs seem to be magnetically attracted to the lights. Thousands of them gather around each separate light pole. We’re in the stands high on the hill looking out at the arena. Its dirt transformed to mud from a casual afternoon shower that the hot sun failed to dry before sauntering off in a most awing fashion.

Numerous ropers donning cowboy hats, blue jeans, button-up shirts, and cowboy boots line the back chutes casually visiting with one another. Others whoop and holler, poking at calves with hotshots, anxiously trying to work them into a chute. On the other side of the arena, three men sit in the confines of a large announcer’s booth that more closely resembles a really big deer stand covered in advertisement signs for Copenhagen, Wrangler, and other businesses predominantly associated with rodeo and the cowboy way of life.

Amongst all of the bustle and such that happens to be this rodeo, a gut feeling tells you that all eyes are on one man. A group of youngsters whose father’s have told them stories of this man, have perched themselves atop the white pipe fence watching his every move. They hope to learn just a little of the magic that allowed him to become a four-time collegiate world champion, and ultimately earn a living for the first part of his life. Even the fathers—though some won’t admit it, find themselves looking up from their idle conversations to watch him as he eases his horse into the box.

Sitting atop his horse Sonny Sikes might be an imposing figure, but if he were to step down everyone would realize he’s merely about 5’9″ one-hundred seventy-five pounds, which is the heaviest he’s been in his life. His calm, patient eyes meticulously follow his horse’s every movement. A gray hat sits atop his black hair, now lined with grays as he approaches old age.

Those who’ve known him his whole life claim he never aged until he was about forty, but now it’s apparent that years of teaching college kids have had their effect on him, or perhaps nature (see: a stroke) merely took its course.

He makes his run and ropes his calf in no spectacular time, not even for someone his age. Some of the kids can’t comprehend where the magic has gone, but their fathers will explain to them later that Sonny Sikes isn’t roping tonight because he wanted to win money, but for a nostalgic factor. Part of him, like an old prizefighter, misses what was once his best trade, frustrated that he’s unable to do what he used to do.

The fans clap and applaud loudly out of respect for the former college rodeo coach as he trudges back to his horse. His usually starched blue jeans are tucked down into his boots to keep the sludge and the mud of the arena from getting all over them. He’s frustrated that he didn’t duplicate the quick times of his younger years, and thus he doesn’t flash that patented smile of his; the one that stretches across his face when helping a young roping student or talking about his grandkids. He calmly tips his gray hat to acknowledge the applause from the stands.

He throws himself back atop his horse and rides back towards the chute area. Even had he set the world record, that calm tip of the hat, accompanied by a large smile might be all you get from Mr. Sikes. He’s always been a humble man, with nothing brash or cocky about him. When he gets back to the chute area, a few college kids help him with his horse, and others congratulate him on catching the calf and try to spark a conversation. Out of politeness, he speaks, but he’s never been one to really enjoy social gatherings all that much. He’s a quiet man, one who talks only when he has something important to say.

Two days from now Mr. Sikes, a man of unlimited patience, will be inducted into the Texas Rodeo Hall of Fame. Another man hobbles over to Mr. Sikes and inquires about what he plans to say in his speech, but Sonny knows he won’t make the speech; even if he could, he wouldn’t.
He won’t make the speech because he’d think of how far he’s come, he’d think of how important rodeo was to him then, the impact it made on his life, and all in all how thankful he is for all it has provided. He’d think of his wife, and of his children, he’d become so emotionally overwhelmed, that he’d merely break down in tears, tears of a very sensitive, very grateful family man.

Another roper chases his calf down the arena on horseback, in a moment he’ll catch the calf, and jump off his horse running through the same part of the arena Mr. Sikes did only moments before.

While the roper’s time may be faster tonight, he’ll more than likely never be able to fill the boots that made the tracks where he now runs, nor make near the impact on rodeo and on people that the man who wore those boots made. This is apparent as more people watch the man, who dauntlessly pursued the career of a rodeo oh so many years ago, lead his horse out of the arena than the man tying his calf.

Mr. Sikes is a man who has been the mentor and teacher to thousands of students, and who will continue not only to mentor rodeo students but his grandchildren, like me, who learn more about life and how to act from watching him than he may ever know!