Finally, about halfway through 2017, I decided I had to see what all the hype was about.

I will preface that I love running books—both non-fiction (“Born to Run“) and fiction (“Once a Runner“). But, I must say, Shoe Dog didn’t captivate me. As stories go, it was entertaining enough, and (Phil) Knight is certainly an interesting character, but I just didn’t feel like I learned anything new that will stick with me years from now.

The only thing I can think of is that I was familiar with large portions of the story as a result of previously devouring everything I could about Steve Prefontaine, Bill Bowerman, etc.

True to my typical approach, what follows is not my review, but some of my favorite takeaways and excerpts from the book. 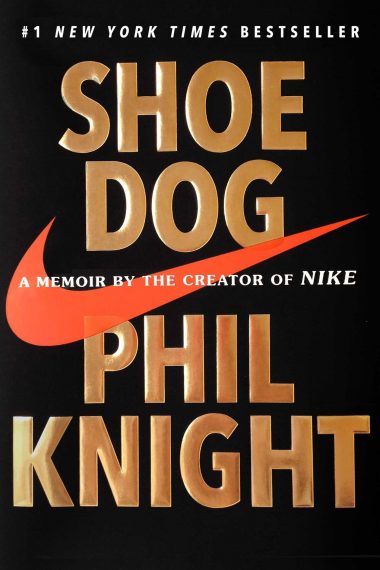 Advice from Phil Knight’s best teacher on the Oregon Trail:

“The cowards never started, he’d tell me, “and the weak died along the way—that leaves us.

I had an aching sense that our time is short, shorter than we ever know, short as a morning run, and I wanted mine to be meaningful, purposeful, creative and important. Above all… different.

I saw it all before me, exactly what I wanted my life to be. Play. [Ryan note: Pair with Charlie Hoehn’s “Play it Away.”]

Few ideas are as crazy as my favorite thing, running. It’s hard, painful and risky. The rewards are few and far from guaranteed. When you run around an oval track, or down an empty road, you have no real destination. At least, none that can fully justify the effort. The Act Itself becomes the destination. It’s not just that there’s no finish line; it’s that you define the finish line.

I told myself: Just keep going. Don’t stop. Don’t even think about stopping until you get there, and don’t give much thought to where “there” is. Whatever comes, just don’t stop.

He was easy to talk to, and easy not to talk to—equally important qualities in a friend. Essential in a travel companion.

Reality is nonlinear. No future, no past. All is now. In every religion, it seemed, self is the obstacle, the enemy.

On what he took from Japanese culture:

Minimalist. Expect nothing, see nothing, grasp nothing.

Quotes that inspired him:

The man who moves a mountain begins by carrying away small stones. — Confucius

You are remembered for the rules you break. — General MacArthur

Don’t tell people how to do things, tell them what to do and let them surprise you with their results. — General Patton

These come up over and over throughout the book.

“Happiness is a how, not a what.” — Herman Hesse

I love this description of Bill Bowerman:

He posses a prehistoric strain of maleness a blend of grit and integrity and calcified stubbornness that was rare in Lyndon Johnson’s America. Today it’s all but extinct.

People, sensing my belief, wanted some of that belief for themselves. Belief, I decided. Belief is irresistible.

The roadside is littered with cautious, conservative, prudent entrepreneurs.

Running track gives you a fierce respect for numbers, because you are what your numbers say you are, nothing more, nothing less.

Fight not to win, but to avoid losing. A surefire strategy for losing.

One lesson I took from all my home-schooling about heroes was that they didn’t say much. None was a blabbermouth. None micromanaged.

On Learning from Failure:

It was worth shooting for. If Blue Ribbon went bust, I’d have no money, and I’d be crushed. But I’d also have some valuable wisdom, which I could apply to the next business (i.e. fail fast).

Each of us found pleasure, whenever possible, in focusing on one small task. One task, we often said, clears the mind.

Confidence. More than equity, more than liquidity, that’s what a man needs.

Confidence was cash. You had to have some to get some. And people were loath to give it to you.

The average person takes seventy-five hundred steps a day, 274 million steps over the course of a long life, the equivalent of six times around the globe.

On the appeal of Steve Prefontaine:

I’d asked myself, time and time again, what it was about Pre that triggered such visceral responses from so many people.

No matter the sport — no matter the human endeavor, really — total effort will win people’s hearts.

I, for one, have always been completely enamored by Prefontaine.

On the magic of sports:

We were trying to create a brand, I said, but also a culture. We were fighting against conformity, against boringness, against drudgery. More than a product , we were trying to sell an idea — a spirit.

A famous Harvard business professor studying Nike came to the same conclusion (that they were a formidable team). “Normally,” he said, “if one manager at a company can think tactically and strategically, that company has a good fortune. But boy are you lucky: More than half of you think that way.”

The last thing we took into account was someone’s feelings. (Ryan note: I appreciate cultures like this, like Bridgewater, etc., but many others aren’t cut out for it.)

His secret, I think, was that he just didn’t care what he said or how he said it or how it went over. He was totally honest, a radical tactic in any negotiation.

Clearly they liked what wearing a pair of Nikes said about them. We were more than a brand; we were a statement.

“There is no finish line. Beating the competition is relatively easy. Beating yourself is a never-ending commitment.”

It didn’t focus on the product, but on the spirit behind the product.

On Stress and Burnout:

When you see only problems, you’re not seeing clearly.

On Playing Not To Lose:

When one team had a big lead in the final seconds, or innings, and relaxed. Or tightened. And therefore lost.

“You measure yourself by the people who measure themselves by you.” — The Bucket List

In yet another sense it’s a living, breathing expression of that vital human emotion, maybe the most vital of all, after love. Gratitude.

It’s never just business. It never will be. If it ever becomes just business, that will mean that business is very bad.

To study the self is to forget the self. Oneness — in some way, shape, or form, it’s what every person I’ve ever met has been seeking.

On Playing the Long Game:

“See those bamboo trees up there?”

“Next year … when you come … they will be one foot higher.”

I regret not spending more time with my sons.

On the Advice He Gives Young(er) People:

I’d like to warn the best of them, the iconoclasts, the innovators, the rebels, that they will always have a bull’s-eye on their backs. The better they get, the bigger the bull’s eye.

America Isn’t as Entrepreneurial as People Are Led to Believe:

Free enterprise always irritates the kinds of trolls who live to block, to thwart, to say no, sorry, no.

And those who urge entrepreneurs to never give up? Charlatans. Sometimes you have to give up. Sometimes knowing when to give up, when to try something else, is genius. Giving up doesn’t mean stopping. Don’t ever stop.

On the Role of Luck:

Hard work is critical, a good team is essential, brains and determination are invaluable, but luck may decide the outcome.