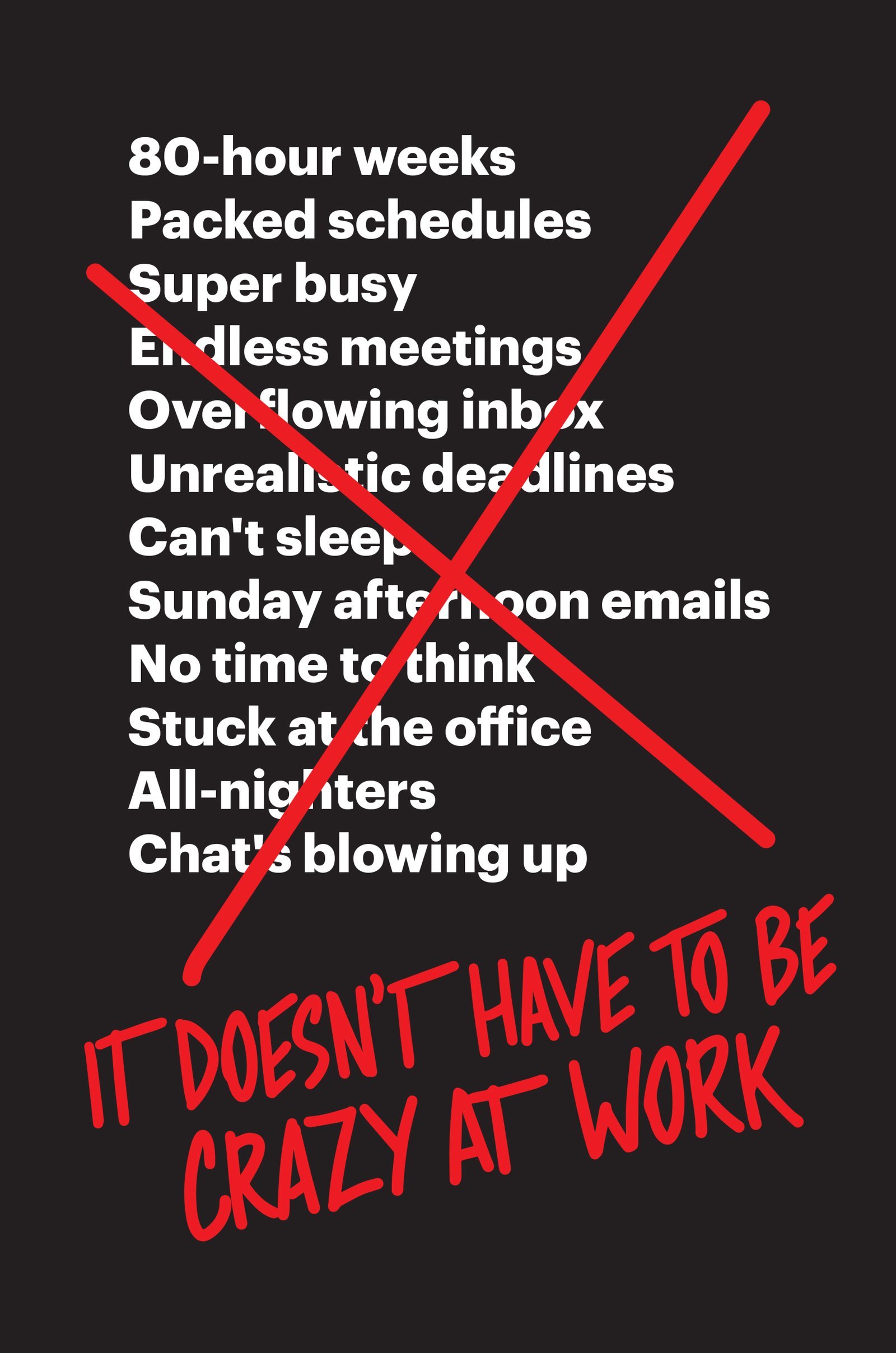 I’ve long been a fan of Jason Fried and David Heinemeier Hansson. The culture they’ve created at Basecamp is unlike anything I’ve ever seen.

In the past, I’ve quoted Jason talking about how alone time is critical, and meetings are detrimental, to a productive workplace culture. I extracted key insights from his TED Talk on “Why Work Doesn’t Happen at Work,” and shared how you should calculate the cost of your meetings; as well as, why you should stop writing plans and start doing work.

In addition, I’ve highlighted 50 of my favorite takeaways from their first book, Re-Work.

Not to mention, I’m constantly blown away by their employee benefits. (I haven’t seen another organization come close.)

So, it’s no surprise that when “It Doesn’t Have to be Crazy at Work,” came out, I immediately picked it up.

This is especially true because, as much as I’ve tried to have work/life balance since my kids were born, I’m not there yet. The reality is that when you do good work, you get “rewarded” with more work and more responsibility and rarely get the resources and/or time you need to be successful.

From talking to others, and as far as I can tell, this is basically Corporate America 101 — especially for high performers.

“It Doesn’t Have to be Crazy at Work,” is a blueprint on how to avoid this reality. 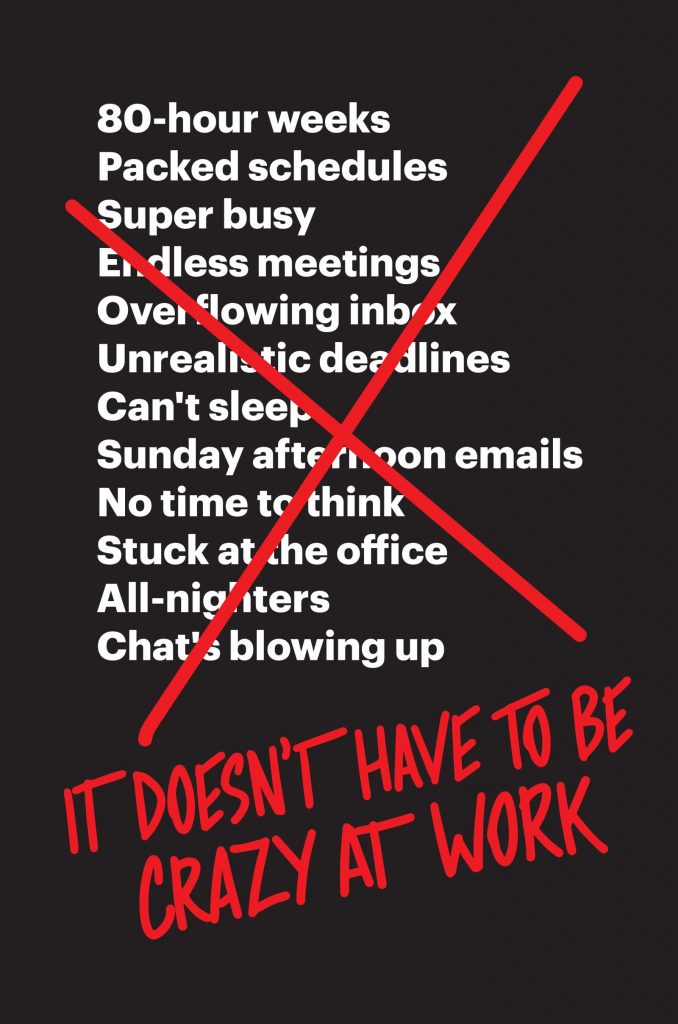 What follows are my favorite takeaways and key insights from Jason and David’s game changing book.

Sustained exhaustion is not a badge of honor, it’s a mark of stupidity.

The problem is that there’s hardly any uninterrupted, dedicated time to do (your) work.

The majority of time is being wasted on things that don’t matter.

How many of those hours are really spent on the work itself?

The modern workplace is sick.

Our Goal: No goals

Why Basecamp doesn’t have goals:

(1). It’s disingenuous for us to pretend we care about a number we just made up, and

(2). We aren’t willing to make the cultural compromises it’ll take us to get there.

[By now, everyone knows that systems are preferable to goals anyhow.]

Make it up as you go

For nearly 20 years, we’ve been figuring it out as we go, a few weeks at a time.

When you stick with planning for the short term, you get to change your mind often.

You’re better off steering the ship with a thousand little inputs as you go rather than a few grand sweeping movements made way ahead of time.

Much corporate anxiety comes from the realization that the company has been doing the wrong thing, but it’s too late to change direction because of the “Plan.” Seeing a bad idea through just because at one point it sounded like a good idea is a tragic waste of energy and talent.

The best information you’ll ever have about a decision is at the moment of execution.

Depth, not breadth, is where mastery is often found.

If you listen to your discomfort and back off from what’s causing it, you’re more likely to find the right path.

If you can’t fit everything you want to do within 40 hours per week, you need to get better at picking what to do, not work longer hours.

Companies guard many things, but all too often they fail to protect what’s both most vulnerable and most precious: their employee’s time and attention.

Instead of adding to-dos, we add to-don’ts.

Not doing something that isn’t worth doing is a wonderful way to spend your time.

Ask people where they go when they really need to get something done. One answer you’re rarely hear: the office.

When someone takes your time, it doesn’t cost them anything, but it costs you everything.

I’ll get back to you whenever

In almost every situation, the expectation of an immediate response is an unreasonable expectation.

Whenever executives talk about how their company is a really big ol’ family, beware. They’re usually not referring to how the company is going to protect you no matter what or love you unconditionally. You know, like healthy families would. Their motive is rather more likely to be a unidrectional form of sacrifice: yours.

Don’t be the last to know

If the boss really wants to know what’s going on, the answer is embarrassingly obvious: They have to ask!

Example: “What’s something nobody dares to talk about?”

The higher you go in an organization the less you’ll know what it’s really like.

The owner’s word weighs a ton

It was a mere suggestion, but it’s taken as a mandate.

It takes great restraint as the leader of an organization not to keep lobbing ideas at everyone else.

Low-hanging fruit can still be out of reach

Respect the work that you’ve never done before. Remind yourself that other people’s jobs aren’t so simple.

Work is not more important than sleep.

The typical corporate give-and-take is that life gives and work takes. If it’s easier for work to claim a Sunday than for life to borrow a Thursday, there ain’t no balance.

Hire the work, not the resume

A list of work is not the work itself. Don’t just take their word for it. Take their work for it.

They hire someone based on a list of previous qualifications, not on their current abilities.

(Basecamp) is really a library for work rather than an office for distraction.

The reality is that most companies don’t actually offer their employees any real vacation time. All they offer is a “fakecation.”

The wrong time for real-time

Almost everything can and should wait until someone has had a chance to think it through and properly write it up.

If the design leads to stress, it’s a bad design.

Our projects can only get smaller over time, not larger. As we progress, we separate the must-haves from the nice-to-haves and toss out the nonessentials.

The team doing the work has control over the work. They wield the “scope hammer.”

A deadline with a flexible scope invites push-back, compromises, and tradeoffs.

Don’t be a a knee-jerk

The rest of the people in the room are asked to react. Not absorb, not think it over, not consider — just react. Knee-jerk it. That’s no way to treat fragile new ideas.

If every one of them (decisions) has to be made by consensus, you’re in for an endless grind with significant collateral damanage. Teh cost of consensus is simply too much to pay over and over again.

Good decisions don’t so much need consensus as they need commitment. We practice disagree and commit.

The final decision should be explained clearly to everyone involved. It’s not just decide and go, it’s decide, explain and go.

Knowing when to embrace Good Enough is what gives you the opportunity to be truly excellent when you need to be.

Narrow as you go

If you actually want to make progress, you have to narrow as you go.

Accept that better ideas aren’t necessarily better if they arrive after the train has left the station.

Doing nothing can be the hardest choice but the strongest, too.

Unless you’ve actually done the work, you’re in no position to encode is as a best practice.

Whatever it doesn’t take

You’re not actually capturing a hill on the beach of Normandy, are you? You’re probably just trying to meet some arbitrary deadline set by those who don’t actually have to do the work.

Have less to do

The only way to get more done is to have less to do.

“There is nothing so useless as doing efficiently that which should not be done at all.” – Peter Drucker

Big teams make things worse all the time by applying too much force to things that only need to be lightly finessed.

We make every idea wait a while. Generally a few weeks, at least. That’s just enough time either to forget about it completely or to realize that you can’t stop thinking about it.

No is no to one thing.

Yes it no to a thousand things.

No is a precision instrument.

Calm’s in the black

Promise not to promise

Promises pile up like debt, and they accrue interest, too. The longer you wait to fulfill them, the more they cost to pay off and the worse the regret.

Promises are easy and cheap to make, actual work is hard and expensive. If it wasn’t you’d just have done it now rather than promised it later.

Sell new customers on the new thing and let old customers keep whatever they already have.

Startups are easy, stayups are hard

Keeping the show running for the long term is a lot harder than walking on stage for the first time.

Pace yourself. Don’t burn out early thinking the hard part is behind you.

No big deal or the end of the world?

Jean-Louis Gassee, who used to run Apple France, describes this situation as the choice between two tokens. When you deal with people who have trouble, you can either choose to take the token that says, “It’s no big deal” or the token that says “It’s the end of the world.” Whichever token you pick, they’ll take the other.

Everyone wants to be heard and respected. It usually doesn’t cost much to do, either.

Companies are culturally and structurally encouraged to get bigger and bigger.

Cutting back when times are great is the luxury of a calm, profitable, and independent company.

A business is a collection of choices.

Are you going to choose contemplation and consideration prior to communication?

No matter where you live in a organization, you can start making better choices. Choices that chip away at crazy and get closer to calm.

A calm company is a choice. Make it yours.

Buy the Book: It Doesn’t Have to Be Crazy At Work

This blog started primarily as a marketing blog, but now I write much more about work/life, social psychology, health and happiness. I will also continue to explore top performers (authors, entrepreneurs, business leaders and more) and dissect what we can take away to be top performers in our own work and personal lives.

If that interests you, consider subscribing (here on RSS) or below: