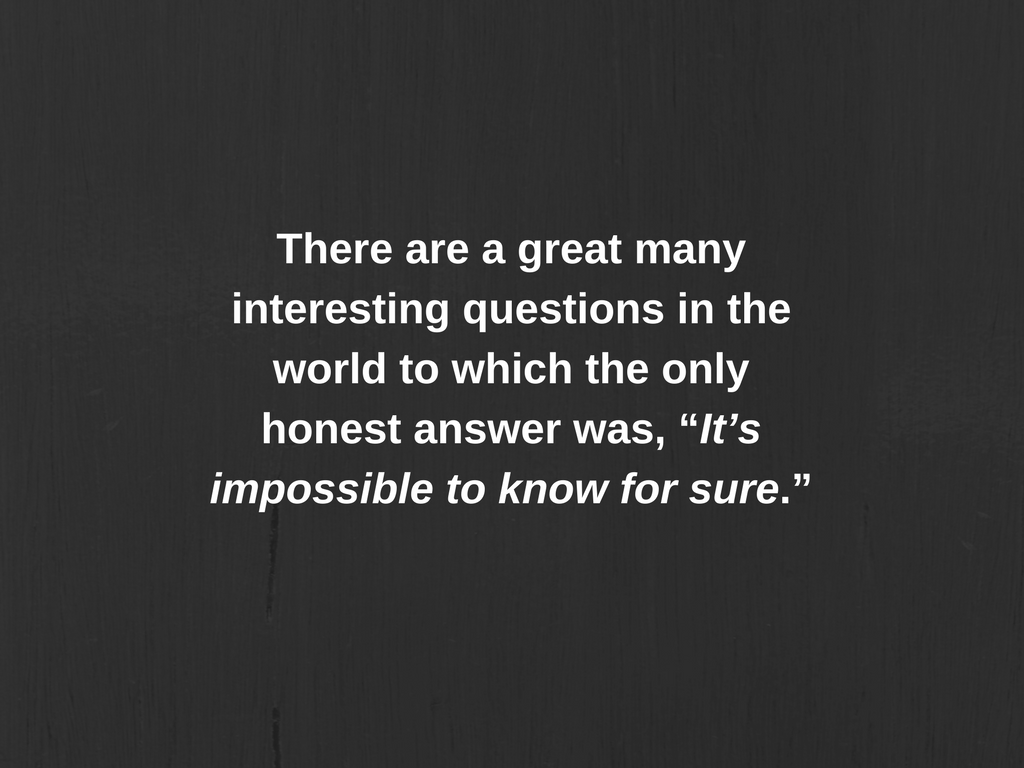 It’s one of my biggest pet peeves. That is, people who are certain all the time.

Early in my career, I was (probably) guilty of thinking that some of these people who puffed out their chests and acted confident in their answers knew what they were talking about.

The more I learned, the more I realized they didn’t have clue.

Sure, there’s something to be said for confidence, but the business world is no place for hubris.

These days, I’m highly skeptical of the know-it-all and more so of the “full service” agency that claims they can do it all well. Personally, I’ve never witnessed it.

Too often, I think we we’re encouraged to speak up and have an opinion (without the right and/or enough data points) and often the loudest, most confident person isn’t correct.

In fairness, your company probably asks this of you – and rarely, if ever, gives you adequate time to delve deep enough to develop true understanding.

Understanding comes from focusing, chewing, and relentlessly ragging on a problem. It comes with false starts, dead ends, and frustration. Thinking requires time and space. It’s slow. It means saying I don’t know.

In short, thinking is everything the modern workplace is designed to eradicate. We’re expected to have an opinion about everything and yet our time to think is near zero. We hold more opinions than ever but have less understanding. (In Praise of Slowness: Challenging the Cult of Speed — Shane Parrish)

I was reminded of this pet peeve (i.e. inspired to write this post) after reading Michael Lewis’ excerpt (from The Undoing Project: A Friendship that Changed Our Minds) about how Rocket’s General Manager, Daryl Morey used behavior economics to revolutionize the art of NBA draft picks.

(First Sam Hinkie on “trusting the process,” and now Morey on saying, “I don’t know.” Evidently, there’s a lot you can learn from advanced analytic, MBA-type, NBA GMs.)

In Morey’s decade in charge of the Rockets, they have the third-best record of the thirty teams in the NBA. They’ve had zero losing records. The guy knows what he’s talking about.

“It’s Impossible to Know for Sure”

Prior to becoming a thirty-three year old general manager, Morey was a consultant.

From his stint as a consultant he learned something valuable, however. It seemed to him that a big part of a consultant’s job was to feign total certainty about uncertain things. In a job interview with McKinsey, they told him that he was not certain enough in his opinions. “And I said it was because I wasn’t certain. And they said, ‘We’re billing clients five hundred grand a year, so you have to be sure of what you are saying.’” The consulting firm that eventually hired him was forever asking him to exhibit confidence when, in his view, confidence was a sign of fraudulence. They’d asked him to forecast the price of oil for clients, for instance. “And then we would go to our clients and tell them we could predict the price of oil. No one can predict the price of oil. It was basically nonsense.”

A lot of what people did and said when they “predicted” things, Morey now realized, was phony: pretending to know things rather than actually knowing things. There were a great many interesting questions in the world to which the only honest answer was, “It’s impossible to know for sure.” “What will the price of oil be in ten years?” was such a question. That didn’t mean you gave up trying to find an answer; you just couched that answer in probabilistic terms.

Think about it. If you’re a business owner, and you spent a vast sum of money on an outside firm to tell you what you were doing wrong and/or help solve your problem, would you prefer that they confidently feed you full of bullshit and take your money? Or, would you prefer that they explain that they can’t possibly know for sure, but provide some data points, models, case studies, et al. that would indicate it’s probably best to head in this direction?

Now, consider that there are entire industries designed to do the former.

People who didn’t know Daryl Morey assumed that because he had set out to intellectualize basketball he must also be a know-it-all. In his approach to the world he was exactly the opposite. He had a diffidence about him—an understanding of how hard it is to know anything for sure. The closest he came to certainty was in his approach to making decisions. He never simply went with his first thought. He suggested a new definition of the nerd: a person who knows his own mind well enough to mistrust it.

We’re All Victims of Bias

Of course, that’s the problem with thinking you know everything. Even the best decision makers, are sometimes prone to their own biases.

“Confirmation bias is the most insidious because you don’t even realize it is happening,” Morey said. A scout would settle on an opinion about a player and then arrange the evidence to support that opinion.

Here’s a few (biases) Morey and his staff at the Rockets explored:

The next season, before the trade deadline, Morey got up before his staff and listed on a whiteboard all the biases he feared might distort their judgment: the endowment effect, confirmation bias, and others. There was what people called “present bias”—the tendency, when making a decision, to undervalue the future in relation to the present. There was “hindsight bias”—which he thought of as the tendency for people to look at some outcome and assume it was predictable all along.

For those of you interested, here’s an excellent cognitive bias cheat sheet. And here’s another from Buster Benson.

Your knowledge should be constantly evolving. You should be willing to change your mind. Remember: strong opinions, loosely held.

The model was an antidote to these vagaries of human judgment, but, by 2012, the model seemed to be approaching a limit to the informational edge it would give the Rockets in valuing players. “Every year we talk about what to take out and what to put in the model,” said Morey. “And every year it gets a little more depressing.”

In summary, there’s nothing wrong with saying “I don’t know.”