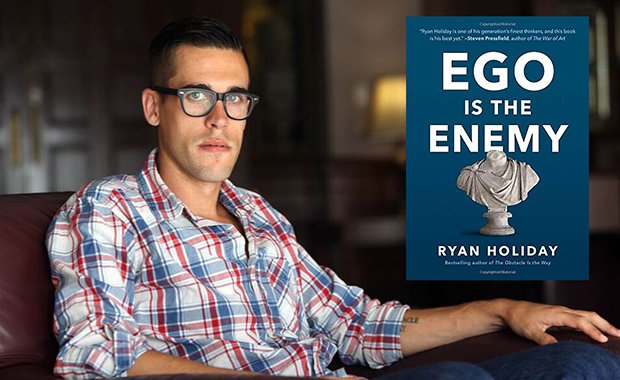 “Ego is the Enemy” explores the fact that many of us insist the main impediment to a full, successful life is the outside world.

In fact, the most common enemy lies within: our ego.

Early in our careers, it impedes learning and the cultivation of talent. With success, it can blind us to our faults and sow future problems. In failure, it magnifies each blow and makes recovery more difficult. At every stage, ego holds us back.

In an era that glorifies social media, reality TV, and other forms of shameless self-promotion, the battle against ego must be fought on many fronts.

There’s so much good stuff in this book that I’m doing something a little bit different with this review.

The book is organized into three parts: Aspire. Success. Failure.

In Part 1 of this multi-part review we learned how to be humble in our aspirations.

In Part 2, we focused on being gracious in our successes.

This third, and final part, we’ll learn how to be resilient in our failures.

What follows are my favorite excerpts, takeaways and lessons learned from the third section (‘Failure’) of Ryan’s book.

I hope you’ll learn something you can take with you and apply to your own life. I also hope that after being exposed to the ideas in the book, you’ll pick up a copy for yourself and explore the way your own ego may be holding you back and the strategies and tactics you can employ to conquer your own ego.

What if you fail?

No one is permanently successful, and not everyone finds success on the first attempt. We all deal with setbacks along the way. The way through, the way to rise again, requires a reorientation and increased self awareness. We don’t need pity — our own or anyone else’s — we need purpose, poise, and patience.

At Any Point, Fate Can Intervene:

If success is ego intoxication, then failure can be a devastating ego blow. If ego is often just a nasty side effect of great success, it can be fatal during failure.

A Trial is Something Each Person Must Endure:

Ego loves this notion, the idea that something is “fair” or not. Psychologists call it narcissistic injury when we take personally totally indifference and objective events. We do that when our sense of self is fragile and dependent on life going our way all the time. Whether what you’re going through is your fault or your problem doesn’t matter, because it’s yours to deal with right now. You could say that failure always arrives uninvited, but through our ego, far too many of us allow it to stick around.

The Only Way Out is Through:

What both (Katharine) Graham and (Bill) Walsh were doing was adhering to a set of internal metrics that allowed them to evaluate and gauge their progress while everyone on the outside was too distracted by supposed signs of failure or weakness.

Something to Aspire To:

Humble and strong people don’t have the same trouble with these troubles that egotists do. There are fewer complaints and far less self-immolation. Instead, there’s stoic — even cheerful — resilience. Pity isn’t necessary. Their identity isn’t threatened. They can get by without constant validation.

Dead Time Is Revived When We Use It As An Opportunity:

This moment is not your life. But it is a moment in your life. How will you use it?

Make Use of What’s Around You:

In life, we all get stuck with dead time. Its occurrence isn’t in our control. Its use, on the other hand, is.

The Effort is Enough

Doing What Is Right Is Enough:

In life, there will be times when we do everything right, perhaps even perfectly. Yet the results will somehow be negative: failure, disrespect, jealousy, or even a resounding yawn from the world.

We Are All Faced With The Same Challenges In Pursuit of Our Goals:

Will we work hard for something that can be taken away from us? Will we invest time and energy even if an outcome is not guaranteed? With the right motives we’re willing to proceed. With ego, we’re not.

We Have Only Minimal Control Over The Rewards For Our Work And Effort:

Doing good work is sufficient. In other words, the less attached we are to outcomes the better. When fulfilling our own standards is what fills us with pride and self-respect. When the effort — not the results, good or bad — is enough.

How Can You Carry On When You Fail?

John Wooden’s advice to his players says it: Change the definition of success. “Success is peace of mind, which is a direct result of self-satisfaction in knowing you made the effort to do your best to become the best that you are capable of becoming.” Ambition,” Marcus Aurelius reminded himself, “means tying your well-being to what other people say or do .. Sanity means tying it to your own actions.”

Many of the Breaks in Life Are Arbitrary:

We let externals determine whether something was worth it or not. It’s on us.

The world is, after all, indifferent to what we humans “want.” If we persist in wanting, in needing, we are simply setting ourselves up for resentment or worse. Doing the work is enough.

“We cannot be humble except by enduring humiliations.” – Reverend William A. Sutton

There is hardly the space to list all the successful people who have hit rock bottom.

The Bigger The Ego The Harder The Fall:

A Break Can Expose The Truth. You Can No Longer Hide or Pretend:

From ruin comes the opportunity for great progress and improvement.

“The world breaks everyone and afterward many are strong at the broken places. But those that will not break it kills.” The world can show you the truth, but no one can force you to accept it.

Face The Symptoms. Cure the Disease:

Change begins by hearing the criticism and the words of the people around you. It means weighing them, discarding the ones that don’t matter, and reflecting on the ones you do.

On Liberation and Appreciating Your Progress:

Stand on the edge of the hole you dug for yourself, look down inside it, and smile fondly at the bloody claw prints that marked your journey up the walls.

On The Fear of Taking Responsibility:

The problem is that when we get our identity tied up in our work, we worry that any kind of failure will then say something bad about us as a person.

If You Fail, Don’t Make It Worse:

You have to be able to see the bigger picture. But when ego is in control, who can?

Most Trouble Is Temporary …

… unless you make that no so. Recovery is not grand, it’s one step in front of the other.

You Are Not Your Failure(s):

At any given time in the circle of life, we may be aspiring, succeeding, or failing — though right now we’re failing. With wisdom, we understand that these positions are transitory, not statements about your value as a human being.

The Only Real Failure is Abandoning Your Principles:

If your reputation can’t absorb a few blows, it wasn’t worth anything in the first place.

Maintain Your Own Scorecard

Adhere to Higher Standards of Performance:

You’re not as good as you think. You don’t have it all figured out. Stay focused. Do better.

The Scoreboard Is Not Judge of Success:

This characteristic of how great people think. It’s not that they find failure in every success. They just hold themselves to a standard that exceeds what society might consider to be objective success. Because of that, they don’t much care what other people think; they care whether they meet their own standards. And these standards are much, much higher than everyone else’s.

Winning Is Not Enough:

Your potential, the absolute best you’re capable of — that’s the metric to measure yourself against.

Take Ego Out of the Equation:

This “indifference spectator” is a sort of guide with which we can judge our behavior, as opposed to the groundless applause that society so often gives out.

The Paradox of Hate and Bitterness:

It accomplishes almost exactly the opposite of what we hope it does. Attempting to destroy something out of hate or ego often ensures that it will be preserved and disseminated forever.

On Protecting Our Legacy, Image and Influence:

If we’re not careful, we can end up wasting an incredible amount of time trying to keep the world from displeasing or disrespecting us.

You know what is better response to an attack or a slight or something you don’t like?

“They cannot degrade Frederick Douglass. The soul that is within me no man can degrade. I am not the one that is being degraded on account of this treatment, but those who are inflicting it upon me.”

The Question We Must Ask Ourselves:

Are we going to be miserable just because other people are?

Everyone Else Has Moved On:

This obsession with the past, with something that someone did or how things should have been, as much as it hurts, is ego embodied.

In Failure or Adversity, It’s So Easy to Hate:

Hate defers blame. It makes someone else responsible. It’s a distraction tool we don’t do much else when we’re busy getting revenge or investing the wrongs that have supposedly been done to us. Does this get us any closer to where we want to be?

For Everything That Comes Next, Ego is the Enemy…

“See much, study much, suffer much, that is the path to wisdom.”

There’s a quote from Bismarck that says, in effect, any fool can learn from experience. The trick is to learn from other people’s experience.

This is Part 3, the final part of a three part series featuring highlights and takeaways from Ryan Holiday’s book, “Ego is the Enemy.”

Click here for my other book reviews and favorite excerpts.

This blog started primarily as a marketing blog, but now features much more about work/life, social psychology, health and happiness. We also explore top performers (authors, entrepreneurs, business leaders and more) and dissect what we can take away to become top performers in our own work and personal lives.

If that interests you, consider subscribing below or by clicking here (especially if you’re reading via RSS).