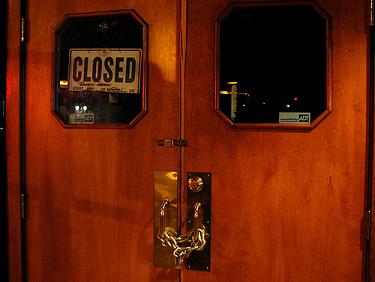 There are a lot of things that go on behind closed doors that you probably don’t know about.

Most of us are pretty good at posturing, especially around people we don’t know, our competition, etc. so why is it so hard to believe that when you get a bunch of these people together they’re not pulling one over on you faster than the producers of a reality television show?

And not just the bottom falling out either.

There’s plenty people of out there quietly cultivating their skill set, carefully making plays, saving money, getting their ducks in a row.

Sometimes that’s false humility. Other times it’s orchestrated manipulation. I’d like to think that most of the time it’s just people outgrowing the old and striving for the new.

Saying all the right things into the mic, in front of the lights, to members of the press works sometimes. It still works when that first rockstar employee walks. It still works the first time you step on someone’s back to hoist yourself up the ladder. If you’re good it still works when the handful of employees have success elsewhere. If you can prove profit and success consistently it might sustain throughout the duration.

Reputation earns you the benefit of the doubt until it doesn’t.

What are you doing behind closed doors?